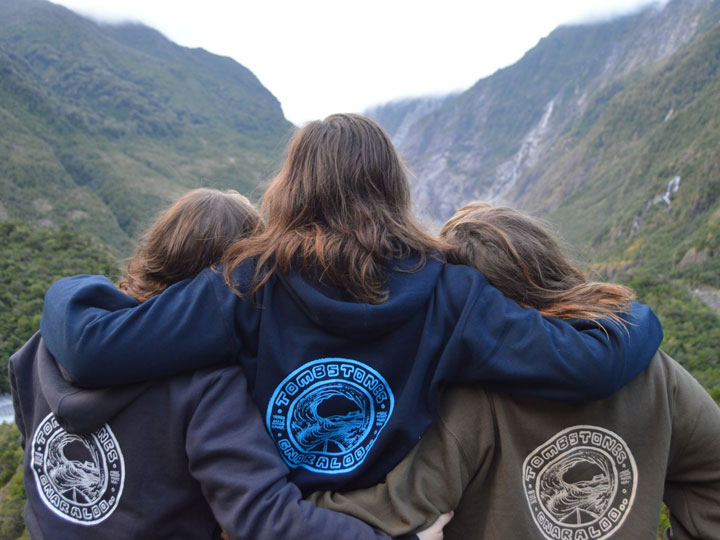 Often we tell the stories of our lives in chapters. We spend our days turning the pages of every new adventure, and when each is over, we put a blank page in the middle and move on to the next chapter. In the stories we read as kids, things seem this way -black and white- but as we grow older, we learn that life tugs you in many different directions and back again. Admittedly, making everything a bit muddled and grey. This is how my experience has been at Gnaraloo.

I came to Gnaraloo Station for the sole purpose of researching sea turtles. I wanted to dive into a new place, surround myself with science, and really experience field research in a remote setting. I wanted to forgo the distractions of the “real world” and spend every day learning – the kind you can only do when everyone around you wants the same kind of intellectual environment. And while I was wishing for all of these things, I realized that this is exactly what I got. Being a Scientific Intern meant every second of the day was a teaching moment, no matter how minor. I even remember once driving in separate cars with Mike Butcher in one and me in the other, radioing to Mike’s car every five minutes, “You had better not be learning things without me! Over!” We strive to be a part of these moments because the whole point of us being in the middle of the desert for 6 months was to gain experience through expert knowledge on the topic. Over time the eagerness faded, but the things I learned during the first few months at Gnaraloo could quite literally prepare me for an apocalypse. How to use the sun and stars to find the way home, which animals could be eaten as sustainable meat and where to find them, and how to find fresh water in the desert, just to name a few.

Once the turtles arrived, however, our bush trekking lessons ceased, and everything revolved around them. Every meal, gathering, or spare moment was spent sharing knowledge about turtle programs of our pasts and elements of external literature that could be used to improve the way we collected data. This was also why we ended the season with a “future project suggestions” list about a kilometre long. There was just SO much information to absorb and what felt like so little time to retain it all. Month four came and our conversation faded from this Nesting Activity and that Hatchling to, “How do I fit all of the data I want onto one little graph?!” And by the end of my time with the Gnaraloo Turtle Conservation Program (GTCP) I was mentally exasperated and invigorated in equal halves.

I didn’t know it yet, but right around this time, when the flies were at their worst, when “winter was coming” but it was 40 degrees, and just before everything turned red from the dust. I fell whole heartedly, deeply, and madly in love with Gnaraloo Station. Even in the worst of times, like the ones listed previously, I could find a reason that I loved this place. Each morning I watched the sun rise over the dunes illuminating sea turtle tracks, the sea salt misting my face as I was left to day dream on my brisk morning walk. Okay, it was never quite this romantic, but still, how could you not form a bond with a place you studied so deeply? By the end of the GTCP, I knew every creature by name, I knew which season each animal would reproduce and I saw their offspring grow up! I watched fledglings learn to fly, joeys learn to hop, and hatchlings learn to swim. I watched the heat of the summer turn the vast landscape into a wasteland and the (very few) spring showers bring it all back to life. Month five held me so closely I couldn’t bear to leave, not just yet, and so- I stayed.

Staying at Gnaraloo meant that I would become a backpacker, or what Station Owner Paul Richardson calls “slave labourers.” The duties of a backpacker were extensive and in every direction that one could dream up. Furthermore, the odds that I had ever actually done any of the backpacker jobs before were almost zero. I spent my first three days mixing concrete to floor the new 3 Mile shop, a task that was rewarding but absolutely horrendous on my body. Just when I thought the work couldn’t get harder, I spent two weeks straight picking up boulders from the wild and placing them as the edging for each campsite (all 68 of them) one by one. If I thought I was fit before, I was sadly mistaken. Into my third week, Paul remembered that I was a “creative thinker” and decided to task me with building IKEA furniture for 3 days – but after 16 chairs, 12 side tables, 4 dressers, and 3 barbeques, I retired as a builder and returned to my role as a geologist. Around the 48th campsite, I began to think to myself why I had a degree in Marine Science, studied turtles my whole life, but ended up picking up rocks for money. Upon this realization I determined there is something alternatively rewarding about using your body to its fullest potential instead of your mind. Additionally, the thing about being a scientist is that it is not one dimensional. Science is something you take with you wherever you go. While picking rocks, you’re watching the interactions between lizards and ants. When you find a tiny snake in the tiles you are supposed to be moving from one place to another, you quickly snap a picture so you can identify it later. These are all things ingrained in us through our lessons in University but something we never stopped to think about actually doing. So it turned out, all the knowledge I had gained from working with the GTCP I continued to use and share with my new backpacker friends. These friends, however, were less excited about my discovery of a Ringed Brown Snake (Pseudonaja modesta) and more concerned about the type of wood they got to use to make a new door frame. To each their own I suppose.

While the differences between being a GTCP Scientific Intern and a Station backpacker are endless, there were a few similarities I found rather surprising. Both of these experiences are goal oriented and create a sense of achievement within those involved. With the GTCP we spent every day for five months collecting data to write a final report of the 10th season at Gnaraloo. Admittedly, this felt a bit like a slow clap, but upon the completion of the program I could not have been happier with the (literal) blood, sweat, and tears, that went into the finished product. I found the “wins” as a backpacker a bit more immediate as far as gratification is concerned, but knowing you physically survived working for Paul after living at Gnaraloo for 5 months is considered an achievement in itself. Quite honestly, I think those who have come and gone as turtles or as backpackers have missed out. While both experiences were incredible independently, it was the cohesive mixture of the two that made me so deeply in love with this place. As a Scientific Intern we saw breathtaking views of the ocean and all its contents, but as a backpacker I began to understand how much effort goes in to protecting and conserving such a unique and special landscape. One simply could not exist without the other.

The Gnaraloo Station chapter of my life brought me knowledge, adventure, and endless memories but above all it made my understanding of the world a bit more beautiful and a whole lot wider. For all of these reasons (and many more), I found myself back at Gnaraloo only 6 weeks after saying goodbye like I meant it. Where one chapter ends, a new one begins, but who is to say they can’t be written about the same place?