Gnaraloo is a unique and rare remaining remnant of Australian wilderness that is habitat to a diverse ecosystem of land and sea flora and fauna as well as threatened and endangered sea turtles.

There are so few remaining wilderness areas left in Australia and the world, that it is important to protect and keep them untouched. Many land and sea species, many of which are rare and endangered, depend on these areas for their survival. Their habitat, feeding grounds and territories have been negatively impacted and diminished almost everywhere due to human impact, encroachment and development.

Gnaraloo is a rare and unique area as it falls within or immediately buffers a world heritage area, a national heritage area and an inland wetland of international importance. It is home to species protected under the Environment Protection and Biodiversity Conservation Act 1999 (Commonwealth) such as nationally threatened and migratory species (sea turtles and birds).

Everyone who has been to Gnaraloo will tell you that visiting and exploring the land, ocean and beaches here is a unique adventure in a wilderness area.

Insensitive and inappropriate future land-use, development and tourism activities pose a great threat to the local inhabitants (we are referring to the plants and animals) at Gnaraloo, including the endangered sea turtles which come from thousands of kilometres away to nest on the Gnaraloo beaches, at the Gnaraloo Bay Rookery and the Gnaraloo Cape Farquhar Rookery. Short sighted irresponsible activities will destroy, alter and negatively impact their irreplaceable land and ocean habitat at Gnaraloo.

Gnaraloo Bay and Gnaraloo Cape Farquhar, stretching only 7km and 14km long respectively within the vast 260km long Ningaloo coast, are important beach nesting areas for endangered sea turtles that have been visiting the unpolluted waters and beaches of these isolated beaches for hundreds of years. Both nesting areas are in the Ningaloo Coast World Heritage Area. They are of State, national and international importance as the Gnaraloo loggerheads feed into and support the Indian Ocean loggerhead population. Loggerheads are listed in Australian legislation as a Matter of National Environmental Significance.

Every single turtle egg, hatchling and adult female turtle matters. It is important to protect the nesting loggerhead females to have as many eggs laid as possible and to have as many of these eggs as possible develop into hatchlings which reach the water each season. This is because only about 1 in 1,000 – 2,000 turtle hatchlings survive to sexual maturity (Ref. DBCA literature), which takes 30 years or more for a loggerhead. The Gnaraloo Bay Rookery and the Gnaraloo Cape Farquhar Rookery are among the few remaining areas in the world where turtles can lay their eggs without disturbance. The Gnaraloo Bay and Gnaraloo Cape Farquhar beaches are also home to large flocks of sea birds and many marine species that live in the lagoon next to the Ningaloo Reef, right off the beach.

Given the known extraordinary and significant environmental profile, importance and significance of the Gnaraloo area, it is important to value and continue to protect areas like this as an investment in the future.

If we allow the Gnaraloo Bay and Gnaraloo Cape Farquhar areas to be developed, we will not be able to replace what we will wipe out, as has happened in so many places elsewhere in Australia and the world. I think it’s important to start adopting a longer vision for what kind of world we want to live in and leave behind. – Karen Hattingh, Chair of the Gnaraloo Wilderness Foundation and Lead Scientific Officer of the Gnaraloo Turtle Conservation Program.

Any proposed developments at Gnaraloo Bay and Gnaraloo Cape Farquhar, as green and low scale as they may be labelled by developers, would have devastatingly negative impacts on the fragile biodiversity of the whole area and destroy irreplaceable Australian and world heritage.

Light spill from artificial lighting at night, which cannot be mitigated given the topography of the areas, will negatively impact the nesting behavior of the incoming female sea turtles and the outgoing turtle hatchlings, causing displacement and fewer nests of an endangered species.

The first set of development will invite the next and the next until these areas becomes built up as has happened elsewhere. There will be increasing human proximity, interest and foot traffic over turtle nests and disturbance to nesting due to the activity, movement and noise associated with development.

There is very little fresh water at Gnaraloo. A development at Gnaraloo Bay and Gnaraloo Cape Farquhar would require infrastructure to produce fresh water such as a desalination plant which would need to discharge heated waste water into the Gnaraloo Bay Marine Sanctuary Zone and Farquhar Marine Sanctuary Zone (Ningaloo Marine Park) which would negatively affect and change these unique areas. Waste management would also be a significant problem and impact the fragile surrounding desert landscape.

People don’t come for the buildings and infrastructure, they come for the beaches, for the remoteness, for the wildlife that is always around, it’s about the wilderness experience in one of the very last places in Australia that’s accessible while remaining remote. Once the place starts to develop, all that will start to disappear, which will be a shame. Hopefully the public can help stop some of the damage that may happen – Gnaraloo pastoral leaseholder.

Would you like Gnaraloo to be further developed and change at the expense of losing its untouched ecosystems? We don’t!

We strongly believe that Gnaraloo should stay as it is, wild and undeveloped, to protect its biodiversity and wilderness experience.

Tourism development on the Ningaloo Coast may be appropriate, but not in areas of the coastline where it will destroy irreplaceable Australian and world heritage that is of great significance. We want Gnaraloo kept as a wilderness area with very important beach nesting areas for endangered and vulnerable sea turtles.

Future tourism development on the Ningaloo Coast must be placed in appropriate locations where these developments will not destroy valuable irreplaceable heritage.

We are raising our voices and standing for the sea turtles, the ocean, the land, the habitat and ecosystems, the plant and wild life, the dark skies and the people. You too can stand with us for Gnaraloo! 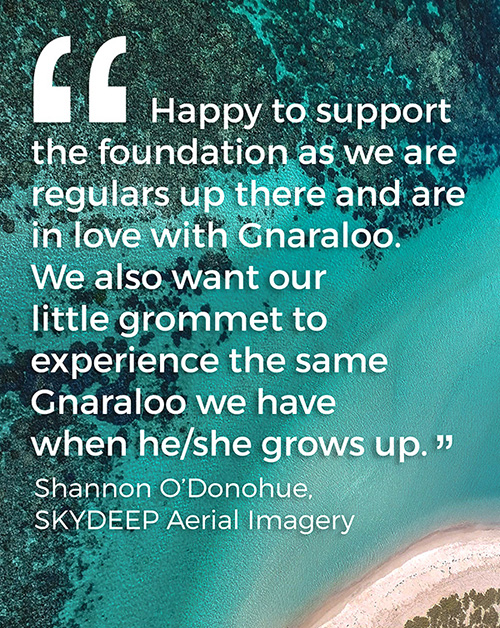 Become an advocate for the Gnaraloo Wilderness Area

Be a Gnaraloo Friend! With your contributions, we can continue our ongoing work to protect the Gnaraloo Wilderness Area.

Share your best experiences in the wild at Gnaraloo with the hashtag #KeepGnaralooWild on social media.

Reach out to your friends and families, your favourite musician (calling John Butler and Xavier Rudd), writer (shout out to Tim Winton), sports person and companies that care to build a network of conscious people who care and act and who are dedicated to protecting this special area.

Never drive 4WDs on the beach and dunes at Gnaraloo because you risk damaging nests or create deep tracks that hatchlings will never be able to cross to reach the ocean.

Lights out! Nesting females and hatchlings navigate by looking for the lowest bright horizon, so any light can confuse this perception and cause them to lose their way.

Respect the Turtle Watchers Code of Conduct ‘stop, drop and act like a rock’.

Recycle your rubbish and collect any trash you find in the wild.

Send us your ideas!

Be True, be Wild, for the sake of our beautiful planet, all of us, your children and the future!

Gnaraloo comprises a number of unique landscapes. Explore our wetlands, scrublands and coastal areas on our interactive map.

LEARN ABOUT OUR CONSERVATION EFFORTS
We are a not-for-profit charity working to protect the natural environment at Gnaraloo and rely on your donations for support. Small or large, every donation helps to make a difference!
Get involved
© Gnaraloo Wilderness Foundation - Privacy Policy - Reproduction (partial or integral) is prohibited without prior authorisation - Website by Claire G.
Back To Top
×