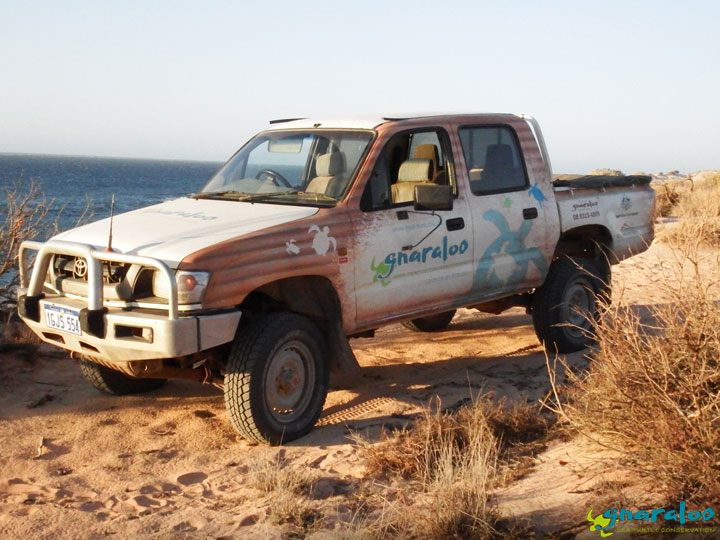 The project vehicle, also known as the “Turtle Wagon”, and “Nigel”. Photo taken by Heather Shipp

Day four on the project saw us starting our four-wheel drive (4WD) training. None of the roads around Gnaraloo Station are sealed and much of the beach we need to access for surveys requires us to drive through soft sand. Training took place under the keen eye of pest management and remote area specialist, and all-round 4WD guru, Mike Butcher. We started with some lectures in the morning on the theory of 4WD and the essentials needed to avoid disaster. After lunch we all set off in Mike’s vehicle and the trusted turtle wagon; a well-used four door Toyota Hilux with Gnaraloo Turtle Conservation Program (GTCP) pictures and branding on the outside, later to be named Nigel by the team. Nigel had a broken antenna and radio, a bent axel in the front, a cracked window, and broken or missing mirrors; he was “Gnaraloo perfect”.

Mike’s car held Mike, Megan and Heather, and in Nigel were Simone, Skip, and team Tess (Tess D and Tess C). After just learning all the disastrous things that can happen while 4WD we were all quite nervous, especially Tess. D and Heather, who are from the states and kept climbing into the wrong side of the car. Before we even set off we hit our first obstacle, Mike’s car battery was dead; first lesson in jump-starting a car. As we drove the very bumpy road, we would two-way radio between the cars and Mike would share his never-ending knowledge and passion for the Australian bush. The contrast of the deep red desert sand, the almost white dunes, and the sapphire blue ocean made you want to pinch yourself and ask if it was real. 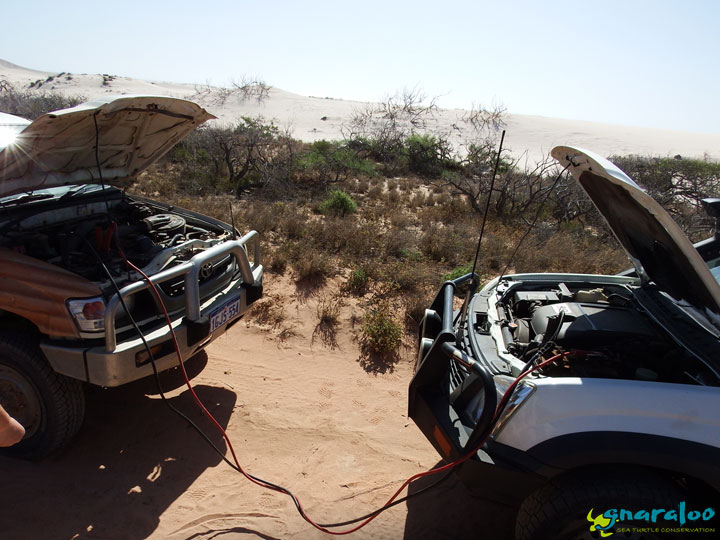 The team had set out with the aim of getting to the Gnaraloo Cape Farquhar Rookery (the furthest reach of our surveying); however, Mike’s intentions were somewhat different. I was driving at the time, and following Mike when he ventured into a particularly sandy area, and started driving all over the place. I kept pace pretty well and just as there was a comment about how well I was driving, I bogged Nigel. Mike couldn’t have looked happier, this was the lesson he really wanted to teach; how to get un-bogged. Being the driver, my stress levels were quite high but the rest of the team was calm, supportive and helpful. We tried going back and forward a bit before I was well and truly bogged, with one wheel in the air, which is when the digging began. The whole attempt took around an hour, a full team effort, some ingenuity with car jacks and maxi tracks before we were in the clear.

The journey continued, with Tess D. at the wheel of Nigel. Our next sand dune saw us slide off the side into some bushes. With some instruction from Mike, we attempted the dune again and with a whole lot more speed, we cleared it. Late afternoon hit and it was time head home. 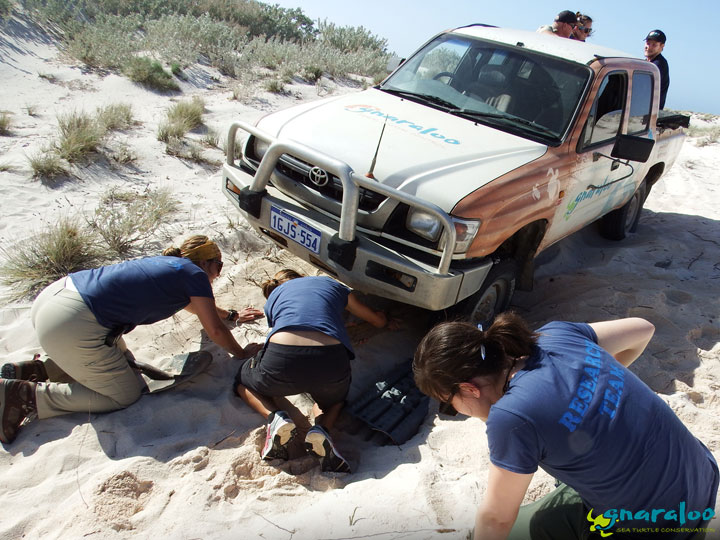 The team pulling together and digging out Nigel, the project vehicle, at 10 Mile.
Photo taken by Heather Shipp. 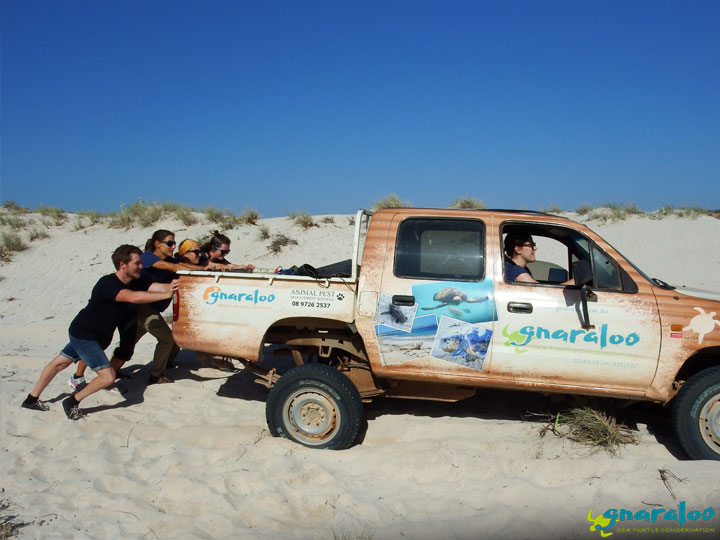 Skip, Simone, Tess D, and Megan, pushing Nigel, the project vehicle out of a bog at 10 Mile.
Photo taken by Heather Shipp 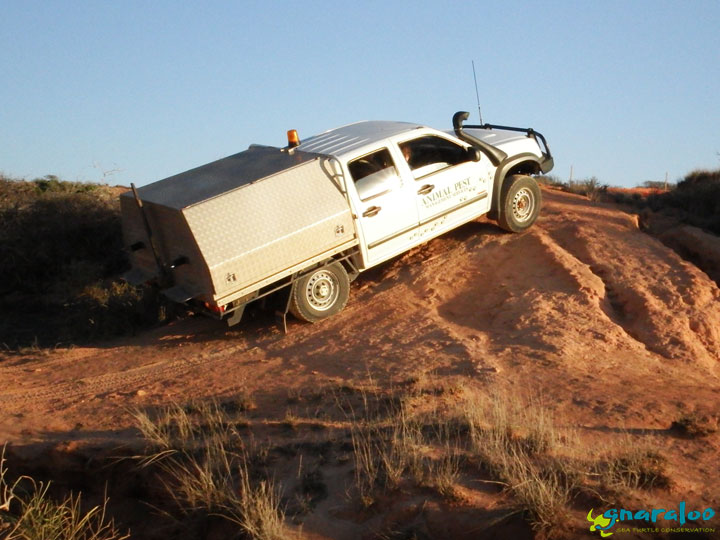 The interns practicing hill recoveries with Mike Butcher at the begging of the Gnaraloo Cape Farquhar Rookery. Photo taken by Heather Shipp

Day two of 4WD training saw us having lectures on survival in remote areas, and Mike telling us all the horror stories of people dying through the years- we paid close attention. We then tested our tyre changing skills on Nigel with great success. We set off again and this time we were determined to make it to Farquhar. Our original teams switched cars and I was driving Mike’s, which was a little bit smoother and more responsive than Nigel was. The first hiccup occurred less than half way through the journey: Nigel’s battery died. Luckily, Mike had replaced the battery on his car that morning and we were now experts in jump-starting cars. Several kilometres and jump-starts later, Nigel was sounding very worse for wear and producing a questionable smell. It was decided that the clutch was to blame and after some fiddling by Mike, we continued. Some more jump-starts and roll starts later we made it to the end of the Gnaraloo Cape Farquhar Rookery. 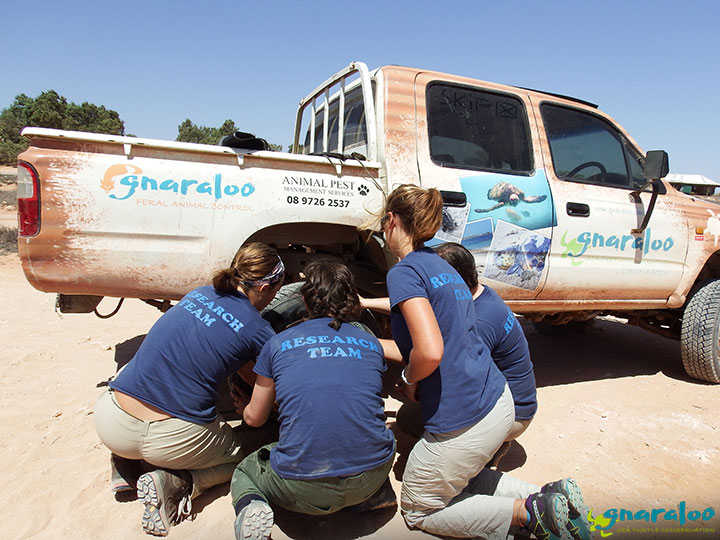 With all of us feeling more confident, we began the trip back to the station. We stopped on the way back and practiced steep hill recoveries. This made me very nervous as the procedure involves releasing the clutch, brake and handbrake whilst on a very steep hill and hoping the car engine holds you. We all succeeded without too much stress. It was then late afternoon and time to head home for dinner, everyone was feeling relaxed and like it was finally the end of a long day. Then Nigel completely broke down: no battery, no clutch, no power steering, and minimal brakes. To be continued….

In any other situation, we would perhaps have panicked, but we were all together, well supplied, had a second vehicle, and our training to keep us safe. Mike got out his towing strap and we started the slow journey home. Tess and I rode along in Nigel as it was towed which was very interesting. It soon dawned on us that we were going to have to be towed across the sand dune that we had previously been bogged in. As we approached we gritted our teeth and crossed our fingers, but that was not enough. Nigel slid down the dune and off the edge landing at a very precarious angle. Fortunately, we had had our quota of bad luck for the day and using a snatch strap Nigel made it out of the dune.

The slow journey home then started again and for once went without any more hitches. We arrived back at the Homestead around 8.30pm. Comfy clothes, a drink and comfort food was needed all around, and as we sat and ate all we could do was laugh.