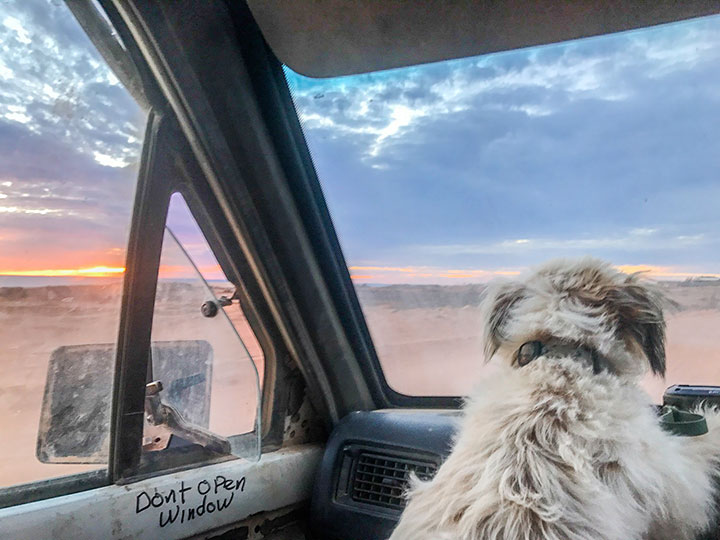 If I had to choose one photo that represents Gnaraloo to me, it would be this one. Gnaraloo is known for its spectacular sunsets but watching it through the permanently closed, dirty window of a beat-up Hilux with the station dog standing on your lap, that just screams “Gnaraloo.”
Photo Credit: Tess DeSerisy

Some call us crazy, some say it’s a spell, but to me it is an all-encompassing, overwhelming, magnetic force that pulls me right back in. The draw to Gnaraloo captivated each of us in a different way, but somehow two of us never quite made it out of the vortex. You may be wondering why I am using so many adjectives that you might also see in the weather forecast for a cyclone, but anyone who has been to Gnaraloo would understand. Megan Soulsby and I left Gnaraloo to enter what our Principal Scientific Officer, Karen Hattingh, calls “the real world”, but chose to return again after a quick visit to New Zealand to this station in the middle of the Australian Outback. Why? Anyone who knows me could assume the answer would be long winded, but it’s actually fairly simple, even two oceans away, Gnaraloo feels like home.

Gnaraloo Station becomes everyone’s “home away from home” and because of this we all become a mostly-functional, anything but ordinary, family. Every person who has been here longer than three months understands that to get anything done it has to be a team effort. We all have something that the others need, and I have a sneaking suspicion that this is why some of us stick around so long. One of the most important people at Gnaraloo is Colleen Mason, bookings manager and metaphorical ship captain. Colleen sees backpackers, turtles (as in the scientific turtle field teams that is referred to at Gnaraloo as the turtles), guests, and regulars come and go, and in order to build a relationship with her its best to do as asked. I’ve clocked countless hours sharing stories, gossip, and greetings with Colleen, but it wasn’t until we found a mutual love of cooking that our relationship really began. Every Sunday I ask for a new cooking or baking implement, beginning with pizza trays and ending with hand mixers, and each time I know the answer will be: “only if you bring me the proper payment.” After 32 Sunday’s efforts, she knows she will always get the first lemon blueberry muffin, made from lemons left behind by unsuccessful fishermen.

Colleen is just the first thing, though, that makes Gnaraloo feel like home. Despite the fact that we are lacking traditional comforts like freshwater showers and fly-less sleep, life at Gnaraloo is easy. We all wake up with the sun and go to sleep when the moon pops out on the horizon. We find ourselves in the Homestead each morning in yesterday’s no-longer-white T shirt, coffee in one hand, and 2 litre bottle of water in the other. The best part, knowing you aren’t the only one with a Linus sized dirt cloud around you come the end of the week. When we get home from work, we are forced to communicate with one another. Each night we ask questions and experience every single second of life together, not scrolling away two hours of each night, alone, staring at a tiny screen with the lights off.

I must admit, however, some of the best times I have spent at Gnaraloo have been on my own. The simple life here gives you the ability to have uninterrupted free time that just doesn’t exist when there is TV to watch, places to go, and people to see. To me, there is nothing like having a short walk when work is done to a quiet place with a good book until the sun begins to fade. Reading is something I have only learned to appreciate in the last few years, but there is something completely satisfying about reading the same 25 books as everyone else on the station and then having a cuppa (Australian for cup of tea) while discussing the in’s and out’s of every single one.

The old saying that everything in Australia wants to kill you is true, but it is hard to believe because everything is just so beautiful. The world around Gnaraloo oozes life, but not in a conventional way. Unlike the rainforest that is so biodiverse it seems to be constantly in motion, the Outback has a unique sense of rugged life, always hiding, but in plain sight. Under every rock, in every crevasse, and past every skeletal tree, something moves, lives, and breathes in ways almost too obscure to understand. If your imagination needs a springboard into the wildlife we find every day, Gnaraloo is home to one of the only two mammals in the world that lay eggs, the Short-beaked Echidna. Like us, though, these animals are only a part of the ecosystem as whole- they need each other to survive. These animals use one another in mutualistic relationships just like the ones the staff at Gnaraloo create just 30 metres away, inside cabin walls.

I find myself using my spare time running, not long, but just far enough in either direction that I can no longer see the Homestead buildings or old cars passing by. I look out into the seemingly empty space around me and I consider why I get so much joy out of being surrounded by absolutely nothing. I look down at my shoes that are coated in the red dust so abundant in my life, I’m not sure I know what they would look like without it. I turn around and close my eyes to listen for the feint hum of the generator. Every time I have the same reaction: I open my eyes, smile, giggle to myself, and let the magnetic force of Gnaraloo Station bring me right back for more.