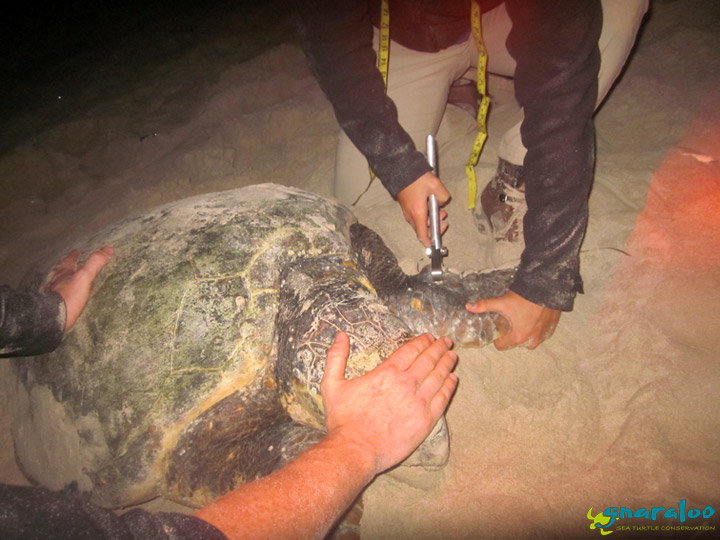 Something about being a benchmark is incredibly noteworthy. Whether you are spearheading a new campaign, or in our case a new protocol, being the first feels invigorating. We are in our tenth year at the Gnaraloo Turtle Conservation Program and it seems every year has brought a new and exciting task. In 2010 we rid the beaches of wild fox predators and became the first to monitor feral animals real time in Western Australia. Season 2015/16 introduced satellite tagging and a documentary solving a few of the mysteries of the Gnaraloo Sea Turtle. This year we become part of a world-wide community of researchers, conservationists, and enthusiasts who eagerly await the arrival of just one turtle on our beaches that has already been marked.

Flipper tagging is a easy way to achieve recognition of individual sea turtles in one specific area. Tagging is often conducted in order to gather information on reproductive biology, movement, strandings, growth rate, or residency of the cohort. Each turtle receives two 40 mm titanium flipper tags, one on the left and one on the right, near what we would consider the armpit of the turtle. Tags are applied during the covering portion of the nesting process or when the turtle has finished her nesting activity and is returning to the ocean. Each flipper tag presents a specific set of numbers that is entered into an international database and can never be duplicated. This process is potentially the most important research strategy for understanding sea turtle life cycles, reproductive migrations, and growth rates, so to say we are excited to begin the process at Gnaraloo is a vast understatement.

While the tagging process isn’t new to me, I always get nervous before I apply one to a turtle. No matter how much you prepare, some things will always be nerve wrecking. We all sat around the kitchen table with a cardboard flipper, each proving our capabilities over Wednesday night spaghetti bolognese. Simone gave me the flipper and decided to move it around a little, jerking it left and right, as I applied the tag- for “realistic practice”. The tag went in without a hitch and with my newly gained confidence I was ready for Night Survey. Skip, Megan, and I spent the 9 o’clock hour cautiously hiking up dunes, around rocks, and through the high-tide BP7 landscape with no success in the finding turtles department. A few more hours passed, along with some of the ocean bulge from the now non-existent moon, and sure enough a long, perfect turtle track headed straight for the dunes. My heart began to pound out of my chest as I crouched down and followed the track to find a momma turtle digging an egg chamber for her soon-to-be children. We watched as she moved her rear flipper in and out, flicking sand with each stroke, and we noticed her right rear flipper no longer existed, reduced to a stump probably by a snacking shark. Shortly following our arrival, Stumpy abandoned her attempt to lay eggs that night, which meant it was my time to shine. Skip gently restrained her head while I crimped each tag, just as I had earlier that night. With little backlash, Stumpy’s tags were in, she was properly measured, and the three of us were able to watch Gnaraloo’s first flipper tagged turtle return to the sea.

Fast forward a few days and two new faces walked the beach eagerly in search for turtles of their own. These two were acutely aware of my adventures with Stumpy, mostly because I won’t stop talking about it, so imagine their surprise to see a track with the very same right rear flipper missing. They followed similar precautions, slowly ascending the beach eventually finding themselves with the same view I described only three nights before. They watched in awe as Stumpy deposited 101 eggs as a souvenir of her trip to Gnaraloo Bay. A cycle of our own began on this night, watching and waiting for WB15101 to return.

Watch The Mystery of the Gnaraloo Sea Turtles here.