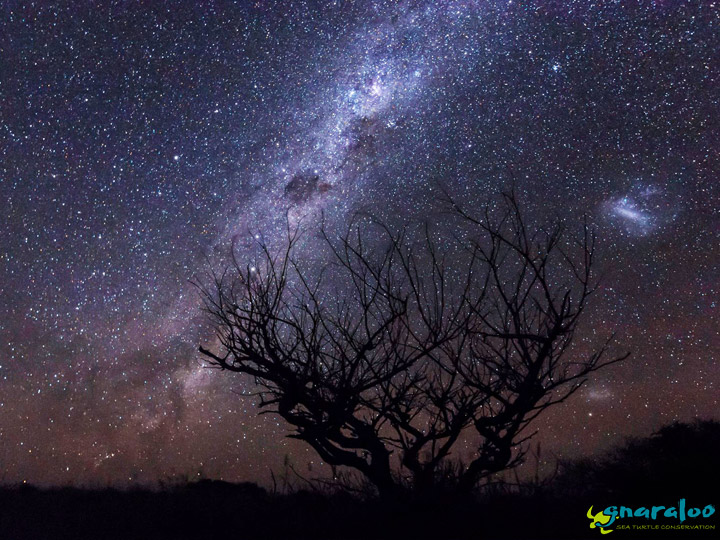 The time had finally come for us to start Night Survey. We had had seen quite a bit of activity on the beach during our Day Survey, and I couldn’t have been more excited. Admittedly, it meant that I would have to kiss a normal sleeping pattern goodbye, but it wouldn’t be forever, and it would be worth it. I was the first person to be rostered on for night shift and I would do four nights in a row, each 7 hours long from the time in and out of the car. The bulk of my excitement stemmed from the fact that I had never seen a nesting female before, I had only ever worked with turtles in the water prior to my time here. I knew my first nesting turtle was going to be a special experience and something that so few people have the privilege of witnessing.

The night came, and myself, Skip and, Simone fuelled up with a big meal so that we would last the six hours of beach walking ahead of us. I also stuffed my backpack full of warm things, acutely aware that I don’t function well when cold, my favourite item being a knitted beanie which closely resembles a tea-cosy. 8PM came around and we headed for the turtle wagon.

While well aware that I have never been able to and will never be able to see in the dark, it was still somehow a surprise to me how poor my vision was at night. I descended the dunes and walked along the beach with all the grace of an elephant on ice. Skip and Simone, or at least their blurry figures, seem to traverse the beach with ease, while I managed to find every hole, rock, and angry crab along the way. It got better with time and slowly everything was a little bit clearer and my walking became smoother. The scene that unfolded before me looked like one of those small black and white pictures out of a vintage newspaper.

Then began the walking. Back and forth along our section of the beach. The walking then continued and continued and by about 1AM I was convinced it was all a lie. Turtles did not exist here or anywhere for that matter. I had been at Gnaraloo for a month and had only seen turtle tracks, which for all I knew were man made. At 2.30 AM we dragged our three weary bodies back into the car and while I had not seen a turtle and walked for what felt like an eternity, I could not regret the night at all. The moon was absent and the night sky was a tapestry of light and dust. Orion stood guard over us for the evening while the southern cross skirted the horizon and the ocean waves played a song that calmed your soul. I may not have seen a turtle nesting but my first night survey will not be quickly forgotten. Perhaps my next night survey would be more fruitful…

Alas not. My suspicions were confirmed, turtles aren’t real. Another 20 km and six hours of walking in soft sand while stumbling over my own feet, and not so much as a turtle track. But much like the previous night I could not be completely upset, the night sky put on a show, with dozens of shooting stars streaking across constellations I desperately wanted to know the name of. In addition to this, tiny dots of bioluminescent algae rolled in to shore, like a child with a leaking glow-stick skipping ahead of us. As I dragged my weary and sandy body into bed that evening I hoped the third time would be the charm…

My third night on survey was a team Tess night (Tess D and myself). Tess, having worked on nesting beaches all over the world, had a few tricks up her sleeve. Once at the beach we did the turtle dance and sung the turtle song, both in Spanish, but it’s the thought that counts. Then the walking. Less than 40 minutes in to the survey and Tess hit me in the stomach with a force that was very unexpected. She shushed me and pointed. A turtle track!!! We silently followed the track up the dune and just over the ridge there she was. We dropped all our things and carefully crawled up behind her, she seemed blissfully unware of us, in some sort of a trance, and if she did notice us she was un-phased by our presence. She was larger then I could have imagined and absolutely gorgeous. Forgetting ourselves for a moment we just stared and grinned so widely that you could see it in the blurry dark. Remembering ourselves we gathered our clip boards and measuring equipment, quickly preforming the tasks needed to. She was in fact large, with a carapace that measured a metre in length and nearly 90cm in width. Her large head, scale configuration, and track gave her away as a Loggerhead (Caretta caretta). After our measurement were done, we sat back and watched as she caringly and carefully covered her egg chamber, patting each bit of sand down with her hind flippers like she was carefully tucking her clutch into bed. It was mesmerising. Eventually we had to drag ourselves away and continue our search, newly invigorated and ready to find more beautiful nesting ladies. The rest of the night unfortunately was turtle-less. But I went to bed content, relieved and ready to do it all over again.

Something about being a benchmark is incredibly noteworthy. Whether you are spearheading a new campaign,…