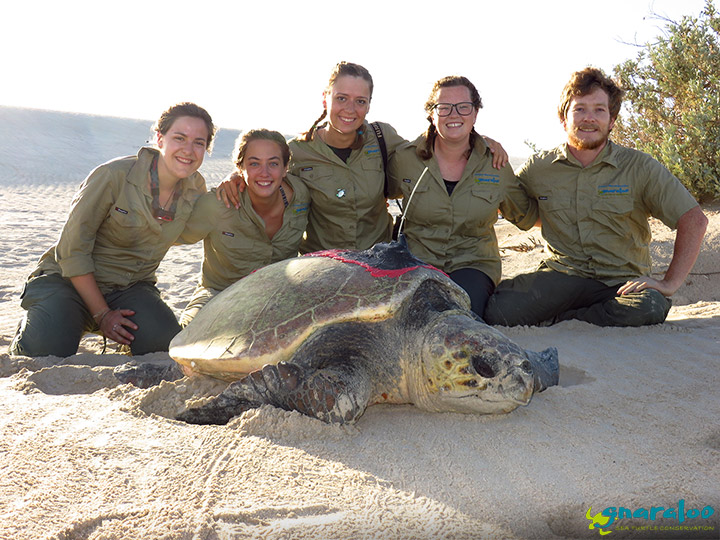 Satellite tagged turtle Baiyungu returns to the ocean with the Field Team at her back.

Not so long ago, we in the GTCP Season 2017/18 were afforded an exciting opportunity. We were given the opportunity to work in collaboration with a turtle satellite tagging program. Satellite tagging provides an abundance of information. The satellite tracker is fixed to the turtle’s carapace and each time the turtle surfaces for a breath, the tag transmits a satellite signal and relays the data it has collected to the researchers. Unlike flipper tagging this sort of tracking allows us to know the exact movements of the turtle in the water, where they go, how far they go, and for how long, instead of only tracking them when they return to the beach with flipper tags.

Anyone can monitor our satellite tagged turtles Gnargoo and Baiyungu on seaturtle.org and through the Turtle Tracker app: 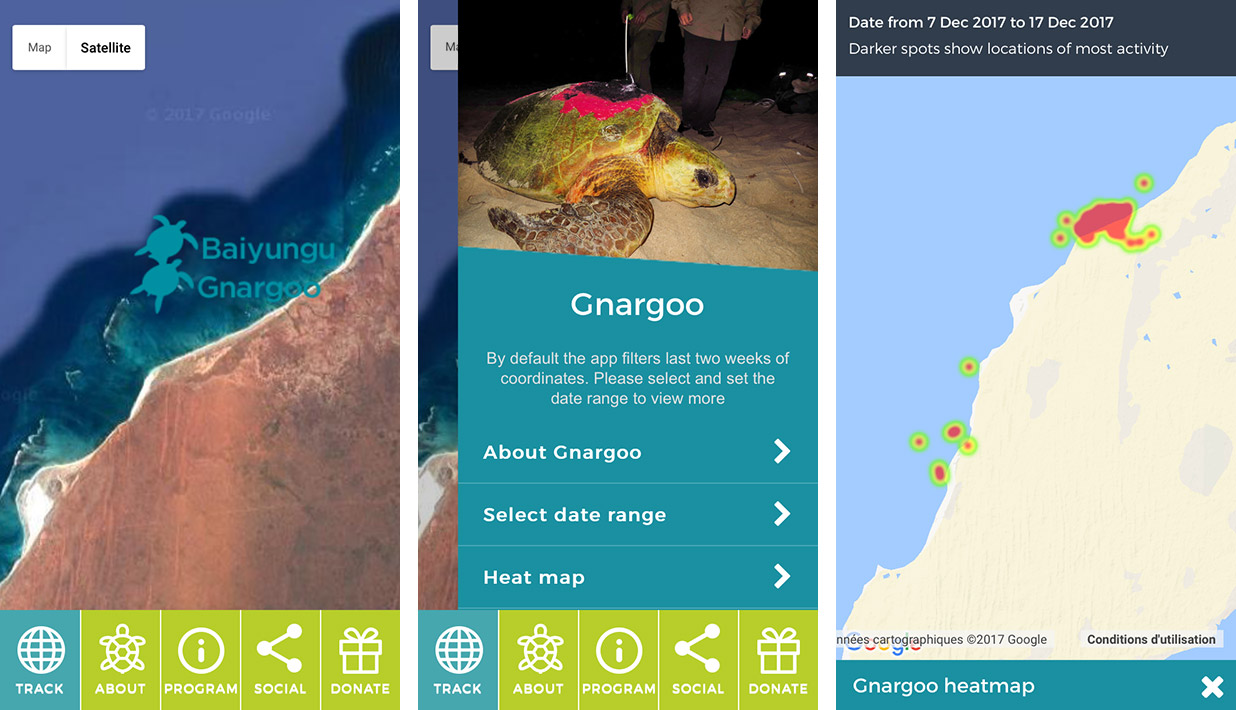 Satellite tagging is an expensive, time consuming, and labor-intensive process, that any turtle researcher would give their right arm to be a part of. So naturally we were all incredibly excited when we were told the news that we would be satellite tagging two turtles. The nights that we satellite tagged would require us to be on the beach from roughly 9 pm to 9 am. The resin used to attach satellite tags took several hours to dry, and then we would have to stay on the beach after sunrise to complete the morning survey. It was stressed that unless we were actually rostered on for night survey that evening, we would not have to come out if we didn’t want to, but that just wasn’t an option as far as we were all concerned. This was not an opportunity we were going to miss. Hindsight is a fantastic thing, being awake for roughly 50 out of 60 hours and walking between 20 to 35 km on the beach during that time, was easier said than done, but, spoiler alert, we all lived and without regret I might add.

The night came and cabin two was a buzz of energy. Normally, only two people went on night survey, so having all six of us out was kind of exciting and refreshing. We filled up with a big meal and the kind of homemade instant coffee that could easily fuel a nuclear power plant. The past two evenings had not been particularly fruitful for turtle activity on the beach so we wanted to make sure everything was perfect; no superstition was left untouched. On the nights that Tess and I wore matching braids in our hair we had seen turtles, so come 7.30 pm, our cabin looked like an eight-year old’s sleepover with perfect French and Dutch braids being crafted atop each head. Tess and I also had a song that we played in the car each night before arriving at the beach for survey (it had nothing to do with turtles, but superstitions rarely have anything to do with anything). Being turtle researchers, we all, naturally, had turtle earrings, which were all donned before leaving. The time came and geared up, we all piled into the trusted turtle wagon and went on our way, and half way there, we got a flat tyre. Luckily, as a team we had experienced many vehicle related disasters and a flat tyre could not even be classed as a problem. Our experienced pit crew had the tyre changed and all tools back in the car in under 12 minutes.

With our lucky song sung, we could start our beach patrol. It did not take us long to come across our first turtle, our turtle voodoo rituals must have worked. We were only to tag females that had nested, and our turtle was body pitting (the first step in nest making) when we found her. Turtles are temperamental at the best of times, and sometimes will go through the full process of making a nest, only to decide, that they don’t like the sand, the location, the weather, the phase of moon or will suddenly remember that they have left the stove on and return to the ocean without laying any eggs. Because of this, two of the team members stayed with her and watched, while the rest of the team continued to patrol the beach. Once we were all the way at the other end of the beach we got the call through the radio that she had started laying. In order to keep 100 kg of turtle in one place, we needed to use a large, heavy, adjustable wooden box, two of which we had placed strategically on the beach a couple days before. Well, at least we thought we placed them strategically, but again, hindsight is a wonderful thing, and turtles do whatever they want. So we made the 1 km trek up and down sand dunes carrying the wooden box, an extreme exercise class I never wish to attend again. 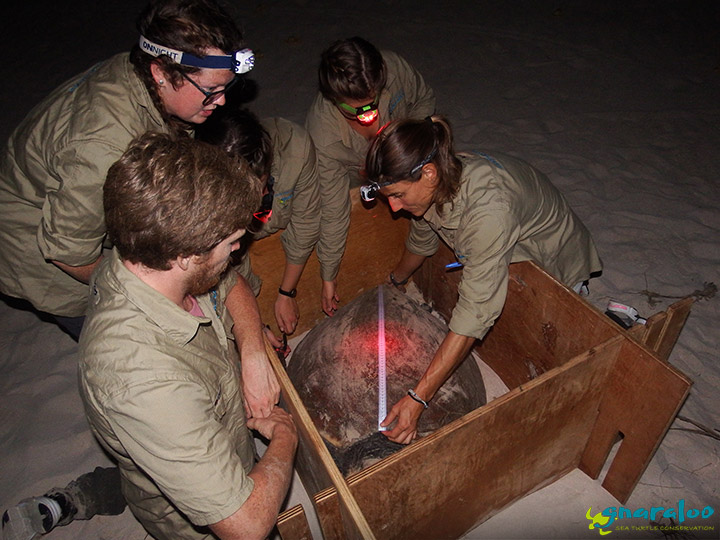 The whole process of satellite tagging is reasonably simple. Once the turtle has finished nesting, the box is built snugly around her, her carapace is thoroughly cleaned, barnacles removed, precise measurements taken, a small biopsy sample taken, and her flippers tagged. Her carapace, which is similar in composition to our finger nails, is then sanded and roughed to help the resin stick. A bright red two component epoxy resin is applied in a large square on the highest point of the carapace and the satellite tag is placed onto the resin. Then the waiting game begins. Roughly two hours are needed for the resin to cure, so those that were not rostered for night survey took the opportunity for a nap on the beach, while Tess and I continued with our usual night survey. 3.30 am saw the end of night survey and we returned to our sleepy group, turtle included. The last layer then needed to be added, a small pot of black tar called anti-fouling which prevents algae growing on the satellite tag and resin. Two more hours and a quick group nap later, the anti-fouling was dry, the sun had risen, and it was time to farewell our turtle. The box was removed, she orientated herself and headed back to the ocean, as we all watched in a happy daze. 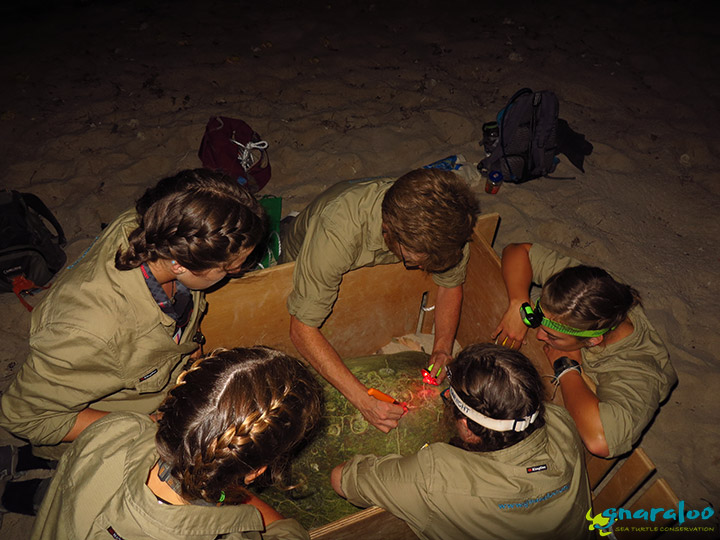 Morning survey was all that stood between our weary bodies and our beds, so we set to it as a group. It was part way through this process that I put on one of my shirts that I left next to my bag while I slept on the beach, and realized that it had holes picked in it by ghost crabs (Ocypode convexa, small bright yellow crabs, with a level of curiosity that would put a cat to shame). This was a revelation that I shared with the group across the radio and it was met with crying laughter. 9 am and we dragged our slap happy, over tired, and sandy bodies into bed, ready to do it all again the next night, and when we woke later that day, we heard the news that our turtle, named Gnargoo, was transmitting loud and clear.

Baiyungu making her way back to the ocean just after sunrise.

Watch “The Mystery of the Gnaraloo Sea Turtles” about our first satellite tracking project in 2015/16. This stunning documentary features ‘never-before-seen’ underwater footage as we track the mysterious journeys of the Gnaraloo Loggerhead turtles. All proceeds go towards the Gnaraloo Wilderness Foundation.