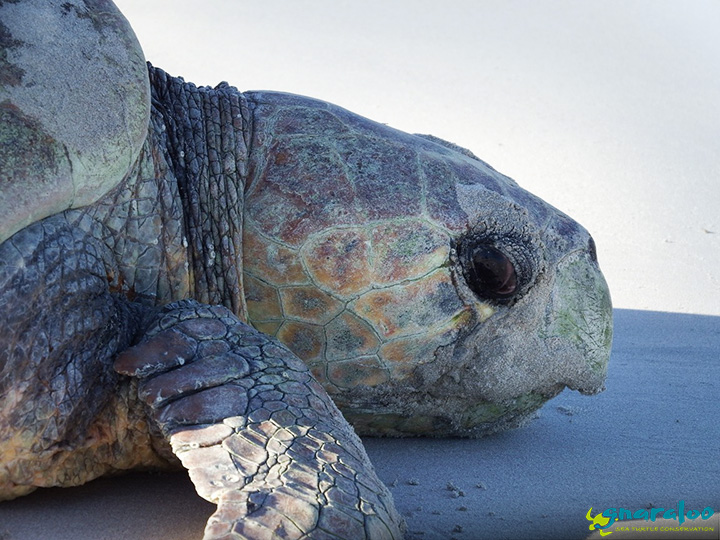 A headshot of a loggerhead (Caretta caretta) female after she finished laying a nest at the Gnaraloo Bay Rookery. Loggerheads, aptly named, are commonly identified by their relatively large heads. Photo Credit: Heather Shipp

This field diary continues with the ongoing theme of sharing some of the various facts and characteristics that comprise the animal that we are currently devoting our lives to – Sea Turtles! Although we obviously love and adore our sea turtles, they are not exactly known for their intelligence. In fact, sea turtles have a surprisingly small brain relative to their large body size.

Sea turtles are reptiles, which tend to have smaller, less complex brains than mammals. Some of the earliest reptiles arose about 300 million years ago during the Paleozoic Era1. Since then, reptiles have diversified, creating the many taxa we know today, including Crocodilia (crocodiles, alligators, gharials, and caimans), Squamata (lizards, snakes, and amphisbaenids), Sphenodontia (tuataras), and, of course, Testudines (turtles and tortoises). Some of the earliest ancestors of sea turtles trace back to the early Cretaceous period, which took place around 110 million years ago2. The next time you encounter a sea turtle, keep in mind that you are gazing at a creature with ancestry that survived the time of the dinosaurs.

From their hydrodynamic carapaces to their lacrimal salt glands, sea turtles are adapted to life in the ocean. Loggerhead turtles (Caretta caretta), which got their name from their particularly large head size, have skulls comprised of thick bones. Their morphologically large head, however, accounts for differences in diet rather than any differences in brain size, and is due to possessing a larger beak and corresponding muscles, which are adapted to crushing and feeding on crustaceans and mollusks.

The loggerhead sea turtle, which is the primary species we encounter here at Gnaraloo, tends to have a carapace usually measuring between 80 to 115 cm in length, varying somewhat between subpopulations and regions. This year, we had an average curved carapace length of 93 cm in the individuals we encountered during our night surveys. In comparison, the critically endangered Kemp’s Ridley (Lepidochelys kempii) grows up to around 60 cm in length, making it the smallest of the sea turtles, in addition to being the only species of sea turtle not found in Australia. Whereas, the leatherback (Dermochelys coriacea) is the largest of the seven sea turtle species and can measure up to nearly 250 cm in length!

Reptiles tend to have larger brains than amphibians of the same body size. Likewise, birds and mammals exceed reptiles in brain size relative to body size, with mammals having brains recorded as ten times larger than reptiles of the same size3. This increase tends to also be characterized by an increase in behavioral complexity3. Hatchlings have proportionally larger brains than adult sea turtles4. However, as the turtle matures, the brain-to-body size ratio decreases.

Notwithstanding the small brain size, sea turtles rely primarily on instinct and are known for accomplishing amazing feats that continue to mystify the scientific community and captivate the public. Although many institutions around the world study sea turtles, there remain many components of their behavior that we have yet to fully understand, such as natal homing. Upon reaching maturity, female sea turtles navigate back to the original nesting area they are from to lay their nests. Several theories persist in how they navigate back, such as the usage of magnetic fields and chemical cues, since thirty or so years pass between the time when they were hatchlings and when they return as adults.

Despite being somewhat lacking in terms of intelligence and cognitive complexity, sea turtles are thankfully quite resilient animals. During our night surveys along the Gnaraloo Bay Rookery, we have encountered several turtles with stumpy, or sometimes completely absent, flippers, most likely due to the prevalent sharks inhabiting these waters. Despite their physical handicaps and limitations, our tenacious turtles persist in dragging themselves up the beach, digging their egg chambers, laying a full clutch, and camouflaging their nest before returning to the water. Once again, they rely upon instinct as they go through this nesting process.

Although sea turtles may not be a top competitor for the world’s most intelligent animal, they have engrained themselves into our hearts and continue to enthrall people throughout the world!

Gnaraloo feral animal control started at Gnaraloo in 2009, when a calculated 1,100 foxes were…

Last one, best one