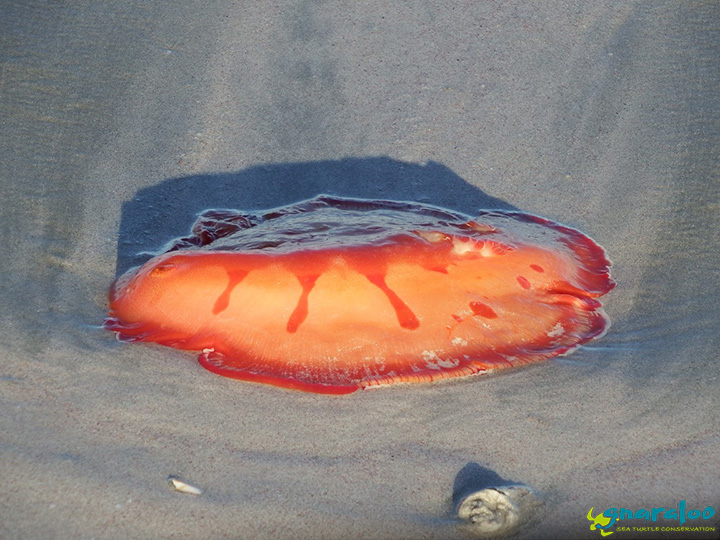 When I first began the GBN-BP7 stretch of the Gnaraloo Bay Rookery (GBR) this morning, I set out only expecting to come across a turtle track or two from the previous night, if I was lucky. This season’s sea turtle activity had a slow start and because I was in the less busy section, I was hopeful to come across some tracks or a nest, but I wasn’t holding my breath.

The morning was off to a pretty good start – not too windy, with a nice sunrise. I enjoyed the scenery around me as I scoured the beach and adjoining dunes, searching for any turtle or feral animal tracks. Although I had yet to see any signs of turtles, I spotted other wildlife, including pied oystercatchers (Haematopus longirostris) and silver gulls (Chroicocephalus novaehollandiae), which I was able to snap some pictures of to add to our species list.

While I was walking along the back of the beach, I spotted something bright red getting washed up by the tide. As I began approaching it to investigate, I wondered at what it could be – a bright red balloon or bag? An organ? A large sea slug? My curiosity remained as I neared it, still uncertain of what this unidentified substance was. Upon further investigation, I discovered it was a flattened Spanish Dancer nudibranch (Hexabranchus sanguineus)!

While I was taking some pictures of this peculiar finding, I noticed something else in the distance. A flick of sand in the air. Still occupied with my camera and the mystery animal before me, I initially wrote it off but a little light went off in the back of my head. I quickly began walking further up the beach, keeping an eye out for the flick of sand again. At first – nothing. Did I just imagine it? A trick on the eyes in the early morning sun? Flick. There it was again. As I drew closer, I tried convincing myself that it was merely a ghost crab digging a burrow. However, as I neared the site, my anticipation soared as I glanced at some large tracks coming into view, making their way up the beach to where I could see sand being tossed into the air. I had to refrain myself from sprinting enthusiastically towards it. And then there she was – a beautiful loggerhead sea turtle (Caretta caretta), in the process of camouflaging her newly laid nest.

Although this is my third season working with sea turtles, finding a turtle still on the beach in the morning is a rare and exciting treat. I stayed with her as she continued to camouflage, ensuring that the location of her freshly laid eggs was well hidden from any hungry predators; this particular turtle was very thorough – making a camouflaged area 6 meters in length!

Once she was sufficiently satisfied with her nest, she slowly made her way back to the ocean, pausing every once in awhile to rest and take a deep breath before continuing forward. Since the tide was going out, she had a farther distance to crawl to get back to the water than when she first emerged. Besides being understandably tired, she seemed otherwise in good physical condition and had a carapace measuring nearly 1 meter in length.

Nearly 45 minutes from when I first found her, she finally made it back to the sea. I continued to watch as her head surfaced from the water and listened as she took a deep breath, biding one final farewell before disappearing again into the ocean. Perhaps we’ll be lucky enough to see her again in about two weeks when she returns to lay another nest!

Our first few days here in Gnaraloo have been exciting, long, hectic, interesting, intense and…