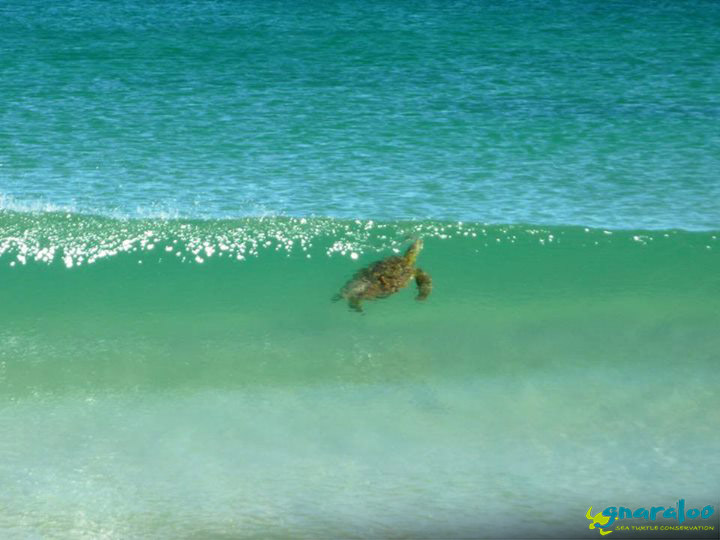 The first day we arrived at Farquhar, Nora, Casey, and I started to set up our camp next to the old Hut, which would be our home for the next five days. Surprisingly, it took less time than we originally planned. It all came down to just a few simple tasks like rolling out our ‘Swags’, building a camp fire, cooking, and organising our equipment. That night was the first night I slept in a Swag, which I had never heard of before and I believe that you can only find them in Australia. What a brilliant invention! I might buy one and ship it to Israel.

The next day we commenced the Day Surey at 5:00 AM and it lasted until 6:00 PM. It took a long time because in just one section of the beach we found 90 old turtle activities which we had to GPS, collect data and sweep the tracks. Beach sweeping was done to avoid confusing old nesting activities with the new nesting activities of the following day. Naturally, after hours of survey in this small subsection, our car ended up breaking down and Casey was unable to pick Nora and me up for a few hours. In this time, we were exposed to the threats of Australian wildlife, including a bungarra that charged at us and Nora getting bitten by a kangaroo tick. Thanks to Feral, who came to our rescue, we got back to the Farquhar hut safely.

The following days were a lot easier. We finished our morning surveys before lunch so we spent a lot of time on the magnificent beaches of Farquhar, with the clearest water I have ever seen and had the opportunity to snorkel in the most colourful reef packed with a variety of incredible fish of different sizes and shapes, giant clams, huge corals and of course sea turtles. The water is so clear that you can just sit in the shallow water, look beneath the surface with your mask and you feel as if you are looking into a giant aquarium.

Driving the car on the rocky and sandy roads in Farquhar was challenging, but as I was driving to pick the girls up from the surveys I was fascinated by the wild life that popped up from every corner; kangaroos jumping from the bush, emus running on the sandy dunes, eagles flying away after being disturbed by the sound of the noisy, struggling engine.

When we got back to the Gnaraloo Homestead, Ash and Brendan were surprised to see how tanned and feral we looked. The best part of coming back was taking off the fly net and having a refreshing shower.

Farquhar was an amazing experience for me that I’ll never forget. Lucky next week Nora, Ash, and I are heading back out on another adventure to Cape Farquhar!