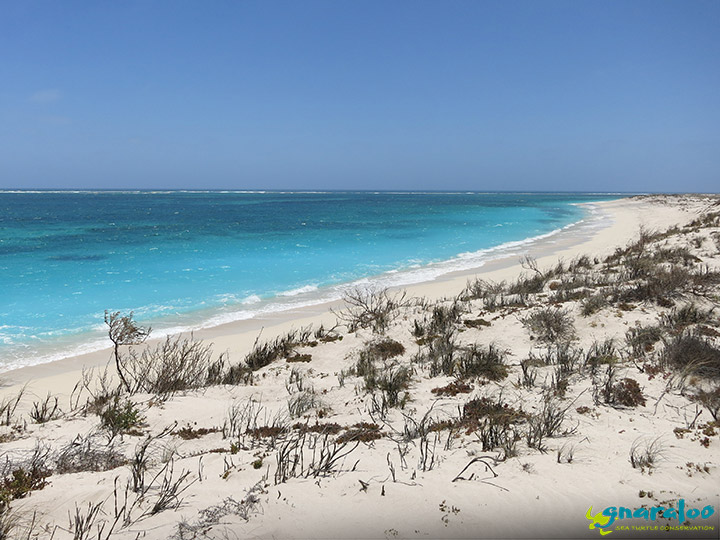 It was decided that for our final Farquhar excursion we would not be camping out but instead driving up to the cape and back each day. While this may have reduced the thrill of getting to spend five days alone in the desert. It did make preparations much easier and we didn’t have to worry about our food going off or the lack of a toilet.

Our first survey day was 07 February. We dropped Nora off at Gnaraloo Bay and then headed up into the emptiness of Farquhar. Casey dropped me off at the Southern boundary and I began my walk north to the Farquhar hut. I saw one old turtle track as well as several sharks, some white stingrays and some grey stingrays with bright blue dots on their back. I also saw a monstrous looking crab that was a dark brown colour with creepy long legs and claws drifting through the water. Fortunately he seemed just as creeped out by me and vanished into the sand once he saw I was watching him. After getting to the hut I then jumped in the car Casey had left and headed up to the Northern boundary past the jagged rocks, sharp cliffs, soft sand dunes and river crossing which is known as the “road”. Casey had much more luck than me and saw fifty odd old turtle tracks and by the time she reached me I had got a good way through my novel. We then headed back to the Gnaraloo Homestead where we then realised our first mistake. We hadn’t left the gate key for Nora and she had been stuck on the wrong side all morning. Oops.

The second day went much more smoothly. We swapped sub-sections and I again saw one turtle track while Casey saw nothing. We got back to the Homestead before ten and were able to enjoy the day indoors rather than sitting in the sweltering heat like we would have had to do if we had been camping.

The third day was when everything went really wrong. Casey dropped me off at the Southern boundary of Farquhar and I started my walk thinking everything was hunky dory but when I reached the hut and jumped in the car to head North I could immediately tell something was wrong. The car wanted to go left. After a few hundred metres the car started to REALLY want to go left and I stopped and jumped out to see what was going on. The front left tyre was completely flat. Never mind I will just swap it over no problems! I grabbed the wheel brace and loosened the wheel nuts and then went to grab the car jack. The jack itself was there but the lever was not. Panic started to set in. I searched through the car and eventually found a jack lever hiding deep behind the seat. Not the one I had been looking for but should work just as well. I then did something even more silly although luckily it became irrelevant. I placed the jack under the axle between the back wheels. I had only changed the back tyres before and it didn’t occur to me that this would not be very effective when the front tyre was flat. Before I could make a fool of myself though something else happened. I pumped the lever up and down and the jack didn’t move. I was fairly stumped. I had only used the jack once before and it just worked that time. I read the instructions on the label. They didn’t help. I fiddled around with it for a while trying different methods to get the thing to work but to little avail. I decided to call for help using the car’s two way radio. There was no response. Either no one was listening or it wasn’t working. I decided to try the satellite phone. It didn’t turn on. I decided to try charging the satellite phone using the car’s cigarette lighter. The car’s cigarette lighter didn’t work either. By this point I was feeling rather frustrated and although it was 8 in the morning it was already getting hot. I had plenty of water and I knew someone would come looking for us eventually but that was hardly ideal. I decided to go and find Casey who was by this point 8 km North of me, waiting to be picked up. It was a long walk there. The whole time I was trying to work out why the car jack wouldn’t go up and whether it was actually broken or I was just an idiot. I found Casey and explained to her that rather than picking her up in the car could she please walk 8km back to the car and try and change the tyre for me. While not overly impressed she took this news fairly well. By the time we got back to the car again it was stinking hot and I had already gone through two and half litres of water. Casey explained to me that you had to twist the top of the jack and after doing so it started working, slowly. So we dug out a hole underneath the car and began trying to jack it up. However our first hole was too deep and the jack wouldn’t go high enough to get the flat tyre off. So then we tried a new location to the side but the sand underneath crumbled because of the first hole. So we drove the car a bit forward and started again. Finally we got the flat wheel off and shoved the new wheel on and were on our way. We got back to the station just after lunch and I was extremely glad to be back in “civilisation” and not having to get rescued.

I thought our fourth and final day would have to be a breeze by comparison. However it started badly. The yellow ute refused to start, despite much begging and pleading. So instead we jumped in the pastoral ute. Now it may be a good time to explain the differences between the two utes. The yellow ute has no floor under the drivers feet, its windshield is cracked substantially, the doors only open from the inside, the windows are stuck down, the high beams don’t work, there are no windscreen wipers or side mirrors and all the gauges on the dashboard don’t work. However it is considered the good ute. The pastoral ute may have a floor but its headlights only work if you constantly hold the lever up and its doors do not open at all. It also lacks any form of power steering. So despite its flaws we headed off in the pastoral ute, our bright smiling faces underlined by the concern we might need to end up getting rescued. The pastoral ute got us to Farquhar fine and I dropped Casey off at the southern boundary and headed off through the sand dunes. 4WD is fun when nothing goes wrong. The key of course is to maintain speed and power. The challenge is the road bends and bumps a lot and occasionally disappears but I made it to the hut and I was very impressed with the old car’s tenacity. I then headed off to complete my subsections and saw nothing of interest. By the time I got to the Goat Cliff, Casey was already waiting to pick me up. Our final Farquhar obstacle was the sand hill. Compared to many other sections of Farquhar it doesn’t look like much. Only a few metres in a straight line, how hard can that be? Our first attempt we got halfway before the car ground to a halt. I jumped out through the window and began shovelling sand and Casey was able to reverse back for another go. This time she revved it up to full speed in low gear and made it ¾ of the way. The third time she made it to the very top of the hill and then stopped but she dropped it back to first and we managed to crawl down the other side with much relief. The pastoral ute had made it! Although it was a rather hollow victory with no turtle tracks to show for it. We headed back to Gnaraloo Bay and managed to get there before Nora did which was fairly impressive, she too had failed to see any turtle tracks. That concluded our final trip to Farquhar and while it may have at times been a bit frustrating with vehicle issues, the beaches are truly beautiful and the sheer remoteness is breathtaking.

During the last few days of 2013, we had a surprise visit from two turtle…