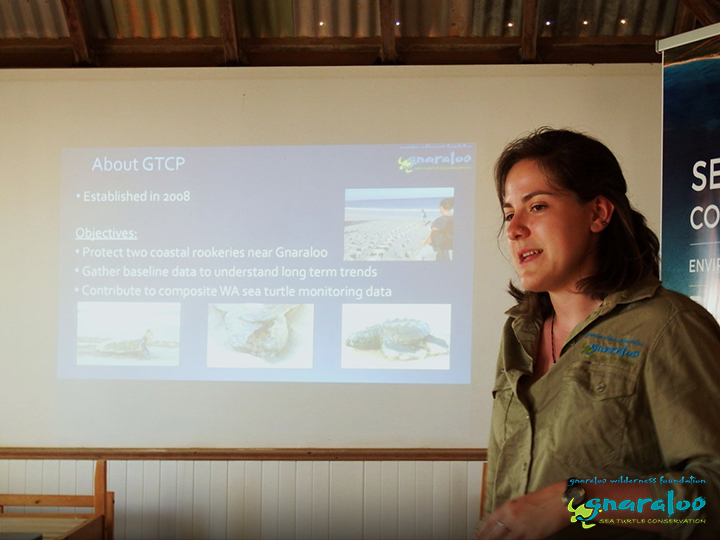 On November 19th, Chantelle and Mel, members of the Department for Biodiversity, Conservation and Attractions (DBCA) on behalf of the Ningaloo Marine Park, arrived at the Homestead here at Gnaraloo. That night, after the initial introductions and greetings, Chantelle gave a presentation on the Ningaloo Marine Park, including the work they do with sea turtles and some of the nesting characteristics of their beaches. We all enjoyed learning about the project and it was very interesting to compare our two programs and identify the similarities and differences, such as average nesting activity per season and species composition.

On November 21st, the Field Team gave a presentation in our cabin on the Gnaraloo Turtle Conservation Program (GTCP). Although we initially anticipated only presenting to the DBCA members and perhaps one or two from the Homestead, we were joined by about 10 individuals, including Mel and Chantelle, Karen Hattingh (the GTCP Project Manager), Paul Richardson (Gnaraloo leaseholder) and various workers around the station. This was our first on-site presentation of the season!

We started off with a brief description of the GTCP and the dynamics of the program. As we described our rookeries and surveys, we also included graphs that display data compiled throughout the years since the program has been running. These graphs showed a composite and trend of the number of nests and nesting activities recorded each year, as well as our species composition, depredation events, and hatch success rates. We were able to share our enthusiasm of being a part of the 10th year of the program and demonstrate how it has progressed throughout the decade it’s been running. Some additions we have initiated this season include the begging of flipper tagging and conducting more nest excavations, both of which we hope will give us better insight into our unique nesting population here at Gnaraloo.

We also devoted a large portion of our presentation to talk about the Gnaraloo Feral Animal Control Program (GFACP), partnered with the Animal Pest Management Services (APMS), and shared the ongoing success story of the continued monitoring and management of feral animals on our rookeries.

While staying at Gnaraloo, Mel and Chantelle took advantage of the nearby coast and were able to get a taste of our beaches by going snorkelling and joining us on both a Night Survey and a Day Survey. Their visit at Gnaraloo provided a great opportunity to network with other professionals in the field and learn more about a similar program working towards the conservation of sea turtles in Western Australia. Furthermore, during their time here, we were able to discuss some of the different issues we encounter and brainstorm together on various subjects, such as community outreach. It was clear we shared a common love for sea turtles and a passion for the conservation of our marine environment!

Journey North up into “Roo Country”

Before leaving for Australia, I didn’t really think too much about how long it would…

Sea turtle hatchlings making the race to the ocean

Just after the new year here at Gnaraloo, the internet went on holiday. It did…