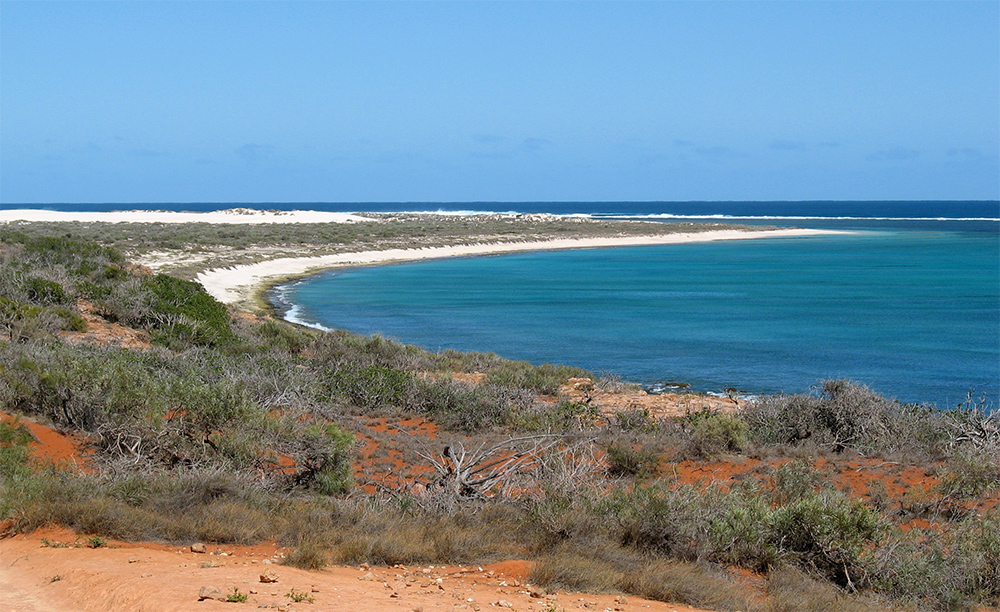 The Gnaraloo Cape Farquhar area is one of the most valuable heritage, biological and scientific reference sites of the Ningaloo Coast, the new Nyinggulu Reserves and the Ningaloo Marine Park, in the Southern Ningaloo World Heritage Area.

Reduce your tax liability by gifting to the GWF. Join our “$1,000 by a 100” crowd fundraiser aimed at companies (contact us directly), make any other donation, or help Gnaraloo through a Become a Gnaraloo Friend financial subscription. All your gifts and memberships are tax deductible in Australia.

Farquhar has been highlighted as an “Area of Environmental Management Priority with high conservation value which should be managed to a high status of protection” (Ref. State Government 2004), with endangered sea turtles, other native fauna, endemic flora and a Karst sub-surface environment that is habitat to Troglofauna and Stygofauna species some of which are rare and believed to face extinction. Farquhar also has important Aboriginal cultural heritage history and value.

Farquhar’s safe keeping was wiped out through actions of Government in December 2020, causing almost 2 years of damages already. These losses are ongoing of Aboriginal, biological, scientific and heritage values (mostly unrecorded and uncatalogued, so that we will never know the full ambit of what is disappearing), including damage to critically important nesting habitat of endangered loggerhead (Caretta caretta) sea turtles.

A local Shire decided unilaterally to open the Farquhar track, without being willing to take onboard contrary advices by multiple concerned Government and non-Government stakeholders (including the GWF) who called for this not to happen.

There was not any public vehicle access or traffic through Farquhar prior to December 2020, with its beaches and dunes managed as strictly vehicle-free for almost 4 decades for conservation by various previous landholders. State Government resumed management of the area from July 2015, and illegal camping, 4WD, fishing and other recreational activities now negatively impact Farquhar, as well as the entire Gnaraloo coastline, and the equally important loggerhead turtle nesting beach habitat at Gnaraloo Bay.

The unmanaged and/or poorly managed public visitation at Gnaraloo is destroying paleontological fossils, Aboriginal history and culture buried in its dunes, damaging nesting habitat of endangered turtle species and interrupting the activities of shore birds, terns, multiple crab and other species on its beaches, and changing the critically needed coastal habitats in this spectacular wild area which sustains life.

The Nyinggulu Joint Management Body, of the State of Western Australia, released a new plan for Ningaloo in October 2022. In it, the Joint Management Body states that it wants to liaise with the Shire of Carnarvon and Gnaraloo Station to again close public vehicle access to Farquhar (but only temporarily for 5 years until such time that systems are in place to adequately manage visitation in order to protect cultural and natural values and visitor safety).

The GWF supports initiatives which promote protection of Farquhar, but we call for a more ambitious vision for the area than a temporary stay of execution.

The GWF, and our members, ask for consideration by the Government, the Traditional Owners, and other decision-makers for actions to:

2. Protect the Gnaraloo Northern Coastal area beyond the 6Mile gate from any unmanaged public access.

3. Consider and achieve a higher conservation listing outcome for the Gnaraloo Northern Coastal area. For example, a Fitzgerald National Park concept which would still allow responsible but managed visitor access and enjoyment.

4. Linked to this, achieve additional and specific conservation recognition in legislation of the Gnaraloo Bay and Gnaraloo Cape Farquhar loggerhead beach rookeries as turtle nesting sanctuaries.

5. Dark Sky Listing for the whole of Gnaraloo, with Gnaraloo Bay and Lake MacLeod as two of its epi-centres of darkness.

6. Ramsar listing for the whole of Lake MacLeod wetland system.

8. Attract a conservation interested buyer for the whole of Gnaraloo Station.

Help our work at Gnaraloo

• CONTRIBUTE to our crowd fundraiser of “A $1,000 by a 100” (aimed at companies), including to enable more peer reviewed papers on the GTCP’s sea turtle research findings. All of donations to the Gnaraloo Wilderness Foundation are tax deductible in Australia.

• BE A GNARALOO FRIEND
Help Gnaraloo through investing in its protection through an affordable financial subscription (at the cost of only one take-away coffee a week!) All membership fees are tax deductible too.

• PAY ONE OF THE GWF’S INVOICES
Various professionals support our work at greatly subsidised rates. Pay one of these invoices and get a substantial tax deduction in return!

• READ the GWF’s “Notice of harm to Aboriginal and environmental heritage values at Gnaraloo Cape Farquhar, Southern Ningaloo Coast, National and World Heritage Area” (January 2021) here. This has not been resolved as at November 2022 and the Farquhar turtles remain in harm’s way.

• EXPRESS YOUR CONCERN TO GOVERNMENT
Speak or write to your local Member of Parliament to express your concerns about the damage being done to the Gnaraloo coastline, its turtle nesting areas as well as to the heritage values of the Gnaraloo Cape Farquhar Area and press for better resourcing and action to stop this.

Get a tax deduction and help the Gnaraloo Wilderness Area too!