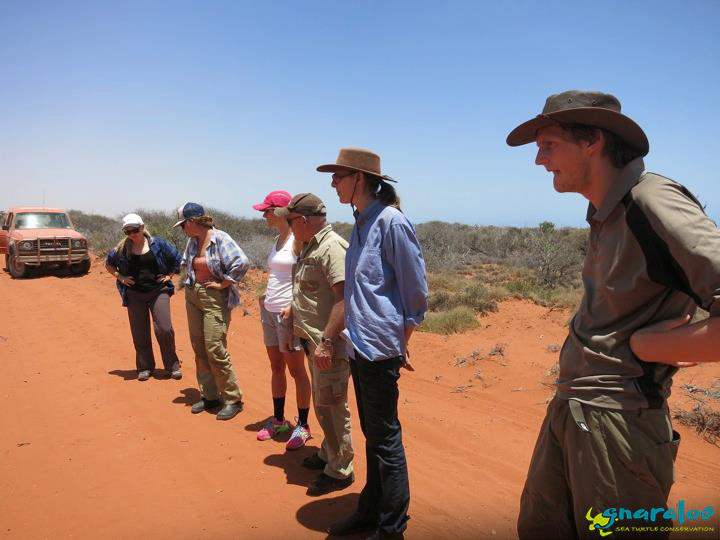 Animal Pest Management Services (APMS) is a company run by Mike Butcher, which works to decrease the presence of feral animals which cause major damage to native plants and animals. At Gnaraloo the main animals of concern are foxes, wild dogs, and feral cats, which will eat sea turtle eggs and hatchlings in massive numbers. Studies have shown that at some rookeries up to 80 % of hatchlings are killed by feral animals. It is thus imperative that we work to reduce the number of feral animals if we want to save species such as sea turtles. So far the Gnaraloo Feral Animal Control Program (GFACP) has been very successful in decreasing the number of predated nests over the last five years. One of the main challenges with hunting feral animals is finding them. Gnaraloo spans over 200,000 acres and it only takes one fox hiding in that whole area to wipe out a swathe of sea turtle nests.

Mike spent two days at Gnaraloo giving us an induction on how to recognise feral animal tracks. This then allows us to periodically report back to him all the evidence of feral animal activity we have found, so that he can then specifically target the necessary areas. The induction consisted of two parts. Firstly we watched a power point presentation with many pictures of different animal tracks as well as some survival strategies for working in remote bush areas. There are many different sorts of tracks you can find around Gnaraloo. Fortunately for us, turtles have massive tracks that are similar to tractor tyres, however other species are not so clear. Kangaroos leave three long lines from their back legs and tail and often two smaller front paw prints. Goats and sheep leave two small lines in wet sand; but in dry sand because they are lazy, they drag their hooves and their tracks almost look like dog tracks if you don’t know what you are looking for. Goannas leave a long wavy line as they drag their bodies along the ground with their toes splayed out to the side. Crabs walk sideways and make a stack of tiny little holes with their many small feet and the dunes are usually covered in hundreds of crab tracks. Birds have three toes and their tracks can just vanish completely as they take to the sky.

Dogs, cats and foxes have a distinctive heel pad and smaller toe pads in front of it. Cats are the smallest and sheathe their claws when they walk and their tracks often meander a lot as they are very curious. Dogs on the other hand have massive tracks and are often trotting so their tracks overlap. Foxes are the most challenging to tell apart as they are in between dogs and cats, their toe pads are more widely spaced apart (with fur in between if the track is amazingly clear), and the whole foot is elongated rather than round. One of the more curious tracks we learnt about and I have since found is the echidna, its small little clawed feet twist backwards and forwards and look very cute. After the presentation we took a small quiz and all passed with flying colours.

The next day we travelled north to look for actual tracks to practice on. We found a couple of dog and cat tracks but no foxes, which was both bad and good I suppose. Mike also showed us the baits he used and explained how they worked and his strategies for placing them around Gnaraloo. The baits are hard dried kangaroo with small amounts of 1080 poison. Fortunately most native animals have a high tolerance to 1080 but the feral animals do not. The baits are dried so that they can sit out in the bush for months without decomposing and also to prevent small animals like crabs from eating them as they are too tough. The baits are hung on small wires from bushes at locations where feral animals have been sighted or where they may be likely to be found such as near fresh water.

Finally Mike showed us some skulls and bones lying around as well. While the goat skulls with their massive horns still attached were both dramatic and haunting, we were mainly interested in the small fox skulls and the differences between and marsupial skulls.

Thanks to Mike we are now fully equipped to recognise and detect just about any animal on the beach, which is fortunately one of the best places to look for tracks as the markings are very clear.