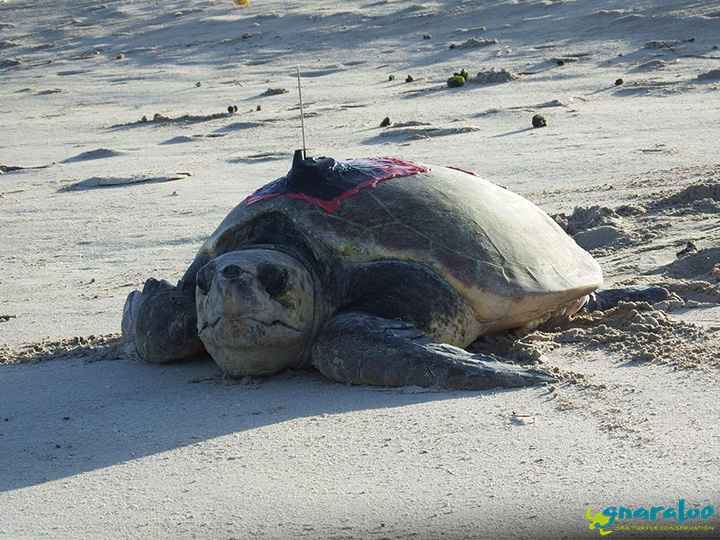 Baiyungu returning back to the water after being satellite tagged in December. During her time on the beach, biopsy punches were taken in order to be sent for stable isotope analysis.

The world of science is ever changing and with it comes new and exciting ways to locate, understand, and interact with the billions of species inhabiting the world around us.

Sea turtles are especially particular because, like other migratory organisms, they spend the majority of their lives in a perpetual state of movement. Arctic terns, monarch butterflies, salmon, humpback whales, and sea turtles all exhibit this spectacular natural phenomenon for the sole purpose of connecting breeding and non-breeding areas1. Conserving migratory species proves especially difficult due to the lack of knowledge about the latter. Breeding grounds for sea turtles are easy enough to find because mothers exhibit natal homing, meaning they return to the same or to a nearby beach to which she hatched 30-60 years prior. Modern science has struggled to find an adequate way to determine potential non-breeding areas and connect them to previously studied breeding grounds.

Before 2010, the conventional way to determine where a particular turtle had travelled was to either perform a fecal or gut-content analysis. While these analyses seemed ideal for short-term cataloguing, insight into long-term feeding could not be obtained through these methods2. Another way of determining connectivity between breeding grounds and foraging areas is with the use of passive extrinsic markers. Individuals in the population may be banded, collared, or flipper tags may be applied in order to determine migratory patterns.

Through previous research on invertebrates, scientists have discovered that organisms which feed on different resources or live in geochemically different habitats can be analysed using their isotopic profile. This procedure is called stable isotope analysis. By using the intrinsic differences in distribution or weight of chemical elements in the body, researchers can determine a multitude of important factors for understanding migratory behaviour. Using an isotope of Nitrogen (δ15N), position on the trophic hierarchy can be determined. δ15N accumulates in the body and as animals eat other animals, the levels of δ15N increase with the levels of the trophic pyramid3. Carbon isotopes, namely δ13C, vary little along trophic levels, but are used to determine original sources of primary productivity3. Large differences in δ13C levels indicate these animals would have dissimilar food sources. For instance, turtles migrating to shallow reefs would potentially be feeding on algae while those travelling to sea grass beds would likely have a diet primarily based on turtle grass. Knowing these δ13C levels can assist in narrowing down a geographic location in order to determine non-breeding habitats. Finally, a ratio of these isotopes and information on metabolic turnover (how fast a turtle digests) can present us with a timescale over which these conclusions are presented.

Along with being a migratory species, sea turtle life cycles are extremely complex. Many individuals travel to several breeding and foraging areas, making the link between breeding and non-breeding areas even more unclear1. Baseline data for δ15N and δ13C levels are obtained through blood or biopsy samples of previously satellite tagged turtles. Satellite tags allow researchers to track sea turtles with adequate accuracy (up to a few hundred metres), which gives them a good indication of what types of food turtles would be eating and where they go after the tags are applied. Because stable isotope signatures may be influenced by diet, habitat type, and geographic location, it is important to gather this baseline data as a validation for stable isotope analysis on non-satellite tagged individuals. It is important to note that all turtles nesting in the same area do not necessarily feed, breed, or internest in the same place. However, according to previous research, it can be assumed that individual females exhibit foraging site fidelity, meaning the feeding area before and after nesting remains the same4. This information allows us to infer that the isotopic signatures found in the blood or biopsy sample describe both where the turtle came from and where the turtle will return to.

Stable isotope analysis, once correctly understood, can answer questions we were unable to even consider 20 years ago. In 2015, a study was conducted regarding the isotopic relationships between nesting females, their eggs, and the hatchlings that emerged from the nest. Because the nutrients in the egg came from the food eaten and stored by the mother prior to nesting, it was assumed that δ15N and δ13C levels of the mother, offspring, and egg would all be highly correlated2. If this was the case, conclusions about the mother’s foraging area could be drawn based on the isotopic signatures of the mother herself, the hatchling, or the egg. Results of this study determined that while not all parts of the egg have the same δ13C, probably due to their development in different parts of the ovary, δ13C and δ15N values from the yolk itself correlate highly to the δ13C values of the mother’s blood sample. Yolks of various eggs were sampled and all found to have the same isotopic make up, allowing us to conclude one egg can chemically represent the entire clutch. δ15N and δ13C values of hatchlings with yolk not yet absorbed were also tested and determined to have the same proportions to that of the freshly laid egg yolk, allowing us to conclude that isotopic values remain unchanged throughout embryonic development. Tissues taken from hatchlings showed highly correlated δ13C values, but lower correlation in δ15N due to the hatchlings absorbance of nutrients instead of active consumption. Finally, through this study we can conclude that egg yolk and hatchling tissue can be used to determine feeding grounds of adult females.

This experiment provides important progression of general information on sea turtle foraging ecology and has drawn conclusions that could potentially change experimental methodology for the better. Globally, six of the seven sea turtle species are listed as Vulnerable, Endangered, or Critically Endangered on the International Union for the Conservation of Nature (IUCN) Red List of Threatened Species5, while the seventh, the flatback turtle (Natator depressus), is considered Data Deficient. IUCN Red List species are very difficult to obtain permits to research, and the permits that are granted often limit sample sizes to only a few individuals. For this reason, it is uncommon to have such substantial findings in one experiment. At Gnaraloo, we have invested in upholding these findings and dedicating our research to furthering the data set of the Indo-Pacific population of loggerhead sea turtles. In December, we satellite tagged and biopsied 2 nesting females to determine their migratory patterns and to contribute to the global collection of sea turtle information. Through experiments like this one and modern developments in scientific practice, we can unfold the mysteries of sea turtle ecology, migratory behaviour, and foraging ground selection.

A morning to remember