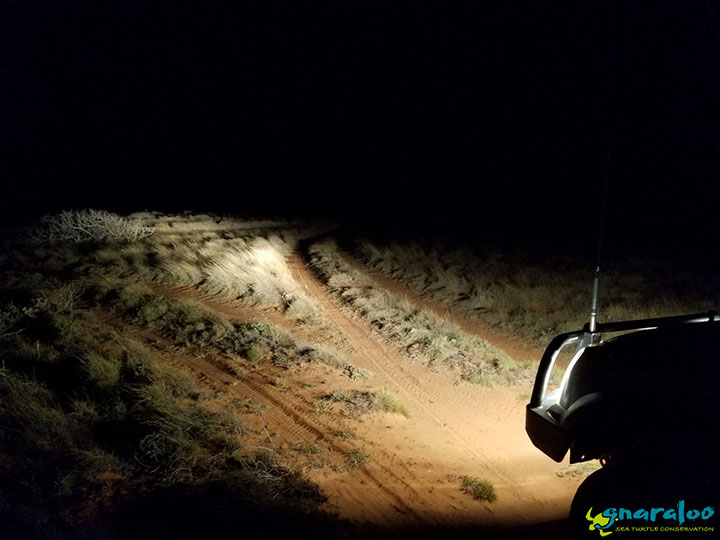 Driving through the Gnaraloo Station searching for feral animals via spotlighting.
Taken by Heather Shipp

After we had spent most of the work day learning about feral animal tracks and 4-wheel drive training, the other Interns and I topped it off by joining Mike Butcher, our 4-wheel drive trainer and Animal Pest Management Services (APMS) specialist, to try our hands at spotlighting. We waited until it grew dark and set out by about 8:00 PM. Mike had two large, hand-held spotlights, which we positioned with one on each side of the vehicle. Most of us had never used spotlights in the field before, and we were all eager to learn and gain more experience.

As we drove along the rock-strewn paths, we kept a sharp eye out for any sign of European red foxes (Vulpes vulpes), feral cats (Felix catus), or wild dogs (Canis lupus familiaris). These species are targeted by the Gnaraloo Feral Animal Control Program (GFACP), managed by APMS, who seek to protect native fauna, including our sea turtles and the rookeries, by controlling and eradicating feral animal populations.

According to Mike, fox eyes will glow bright red when shined upon by a spotlight, whereas cats’ eyes will glow white, like two small moons reflecting back. We used the spotlights to scan the darkened landscape as we searched for any eyes illuminated by the lights or other signs indicating the presence of feral animals. We stopped several times along the roads to view and discern imprints in the sand, putting our track training from earlier that day to good use.

Unfortunately, our streak of malfunctioning equipment continued, and one of the hand-held spotlights began flickering until it eventually gave out completely and we were reduced to using one spotlight to scan both sides of the vehicle as we drove through the night.

Although we did not encounter any feral animals the first night, we did find many sleepy common wallaroos (Macropus robustus), locally referred to as euros. We also managed to spot some nocturnal rodents, including a couple stripe-faced dunnarts (Sminthopsis macroaura) and even a spinifex hopping-mouse (Notomys alexis)!

The second night, Megan, Simone, and I joined Mike once again in a search for feral animals through using the spotlights. Earlier that day we found several cat tracks as well as what was most likely fox tracks near a dump located on the station. Determined to find the fox, Mike set out again with the spotlights, allowing us to tag along and gain additional experience.

Although the one spotlight continued to be dysfunctional, we persevered and managed the remaining working spotlight quite well, giving whoever was operating it at the time a bit of a wrist workout from rotating it back and forth between both sides of the road.

Less than an hour after we began, there it was – two glowing white orbs in front of us, reflecting back the light produced from the vehicle’s headlights. With years of experience under his belt and a steady hand, Mike aimed for the cat and fired, landing a perfect shot. Shortly thereafter, we exited the vehicle and made our way using head torches to where the cat lay, now deceased. This particular individual was a small female who was coming into breeding season. We examined her size and overall health, including her stomach contents, which was mainly empty apart from a few old beetles.

Having sufficiently assessed the feline, we reentered the vehicle and resumed spotlighting, making our way through the Gnaraloo station and near the Quobba border. Simone was the first to spot the second cat in the distance; however, this one managed to duck behind one of the several dunes that separated us and make its escape.

Going spotlighting was a unique experience that gave us the opportunity to become more familiar with the GFACP, in addition to seeing some of the native fauna around the station. It not only allowed us to gain additional hands-on application in the field, but also demonstrated practical conservation in action.

Hi! My name is Tess DeSerisy and I recently received my undergraduate degree in Marine…

It’s November 1st, which means that today is our first day of sea turtle nesting…